This hashtag is currently trending on Twitter, and while most of the writers in the Twittersphere are using it to vent their frustration, some words of wisdom have also come up in discussion. One of the most common complaints among writers seems to be that people who don’t write assume, as soon as you identify yourself as a writer, that writing is merely a hobby–something you do because you have enough money or enough free time that you don’t have to hold a “real” job.  In my experience it’s been almost exactly the opposite. Writing is my real job, and anything else I’ve done to make money has simply served to support my fledgling career as a writer. Understandably, it’s annoying when anyone says, “So you’re not working.”

What’s most interesting to me about this discussion is the criteria the general public assigns to “real” writers. The line of inquiry to determine whether or not you’re a real writer usually goes something like this: “So you’re a writer. Anything I would have read? Why haven’t I heard of you? Can I buy it on Amazon?” Basically, unless you’ve been on a New York Times Bestseller list, you don’t get to call yourself a writer without being given the third degree on a daily basis. Someone watching the debate unfold was curious enough to ask Joanne Harris–author of Chocolat and Gentlemen and Players (a personal favorite of mine), among others–why these questions are perceived as rude. Her answer was pithy and on point:

“If someone tells you they’re a professional writer, it’s generally impolite to then assume it’s a hobby…”

What, then, should be the benchmark for a “real” writer? Publication? Sales? Certainly there’s a difference between a published novelist and someone who’s writing Star Trek fanfiction in their spare time. But how do we make the distinction? Harris goes on to explain that it may be more complicated than Twitter has, thus far, been willing to allow. The simple act of writing doesn’t necessarily make you a writer, but you don’t have to be J. K. Rowling to call yourself a writer either. There’s a difference, she says, between learning to think of yourself as a writer, and telling other people that’s what you are: 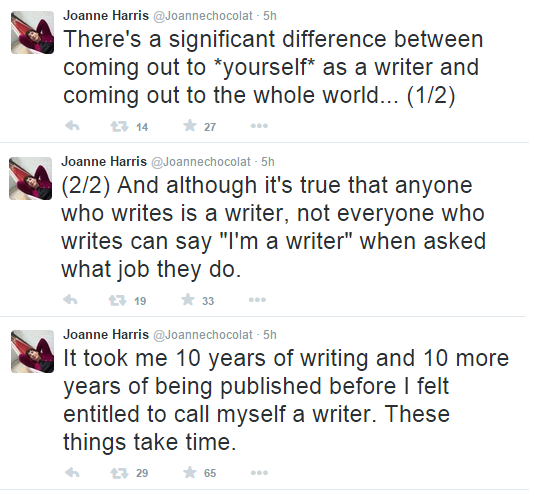 Perhaps it’s time we start approaching the term “writer” with fluidity in mind. If you write, indeed, you are a writer. It’s not unlike being an athlete–it’s something you can do and call yourself without receiving any sort of paycheck, or something you can make millions doing and add the designation of “professional” to the title. But until such a time comes when the terminology is clearer, let’s try giving writers the benefit of the doubt. If someone identifies themselves to you as a writer, it’s likely that’s they’ve gone through at least part of the process Joanne Harris is talking about. They’re confident enough in their craft to call themselves a writer, and they probably don’t do it lightly. So, if you’re curious, avail yourself of the #TenThingsNotToSayToAWriter tag on Twitter, have a good laugh, and know what questions not to ask next time you find yourself face to face with another inkslinger.

Writer, reader, melomaniac // author of IF WE WERE VILLAINS View all posts by M. L. Rio