Every time I send a new draft to my agent–or my committee, if we’re talking academia–there follows a strange fallow period where I simply don’t know what to do with myself. After weeks and months of a familiar circadian rhythm hugely influenced by how much work I want or need to get done each day, suddenly finding myself with idle hands can be so disorienting that I forget to enjoy it, forget to bask in the luxury of free time. I don’t want to perpetuate the (grievously mistaken) impression that academics don’t work during the summer–because the truth is that they use the summer to catch up on all the work they didn’t get done during the year because they had classes to teach and papers to grade and conferences to attend and so on and so forth–but even though I’m spending the summer at the Folger’s Paleography Institute and working on my dissertation prospectus and crafting syllabuses for teaching next year, these first few weeks have felt uncommonly free. After months working around the clock, I finished grading final papers and essays, sent a new draft of a new book to my agent, and passed my comprehensive exam on May 21. Waking up the next day when it was all over felt like finding myself shipwrecked on a tropical key with only a scrambled recollection of how I got there. It felt like paradise–until the island fever set in.

I am trying hard to mitigate my workaholic tendencies, but that doesn’t change the fact that without something to work on, I get restless. My agent is in the process of reading my latest draft, and because I don’t want us to be working at cross purposes, there’s not much I can do right now to work on my current book project. Fortunately, because I’ve never figured out how to turn off “plot bunnies,” I usually have a long list of ideas waiting in the wings for a moment just like this one–when my current manuscript is out of my reach but my brain needs something to do. So: let the plotting begin.

I’ve mentioned before that I’m a fanatical outliner; because I like to write in a more-or-less linear manner and because I hate staring at a blank page wondering, What next? I never start a first draft until I have a pretty solid outline to work with. I’ve heard many a protest that this sucks all the creativity out of the process, and I respectfully disagree–planning ahead lets you engage in two completely different types of creativity but (here’s the crucial part) not at the same time. Every writer is different, but personally I find it difficult to produce good prose and find the right pacing and “set the stage,” as it were, if I don’t know where the story’s going. Much easier to focus on the shape and texture and tension of a scene if the question isn’t what happens but how it happens. So, finding the narrative is Step 1. It’s hard to build a house without a blueprint.

This seems to be how many newish writers get stuck. I hear a lot of variations of, “I’ve realized I need to outline but I don’t know where to start. How do you outline your projects?” The assumption often seems to be that one can approach outlining like assembling IKEA furniture–that’s there’s a simple how-to manual which, if interpreted correctly, will eventually yield a reasonably stable bookcase (or, in this case, book). Speaking only for me, this is pretty much the opposite of how outlining happens. Despite the fastidious, buzzwordy connotations of a word like “outline,” this part of the process is messy and unpredictable and wildly experimental. So when people ask how I outline, it’s difficult to know how to answer. But because that’s the phase I’m in right now, at least until I get my other MS back from my agent, I figured I’d try to describe it.

Every story starts as just an idea. Inspiration can come from anywhere–a painting or a newspaper article or a riff in a song which makes the hair on the back of your neck stand up–and suddenly the imagination is off like an improv troupe with a prompt, trying out different personalities and scenarios, snatching and discarding different ideas until something sticks, something clicks, and the pieces begin to fall into place. Inspiration tends to ambush me, rather than tapping me politely on the shoulder when I don’t have anything more important to attend to, so most embryonic story ideas get scribbled down wherever they strike. Then I mostly leave them alone, picking them up to play with in spare moments on the train or at the gym or when I just need a break from whatever project is consuming most of my attention at the moment. Little by little, pieces fall into place. I collect ideas for characters and scenes and settings and try out different plot points as they occur to me. This often takes months, precisely because it’s a process that can’t be forced. It can, however, be helped along a little.

In the early stages, when nothing’s set in stone, a book is more about the feeling than it is about the facts, and what I refer to as “outlining” includes time spent splashing around in the aesthetic space of the story–which might mean making pinboards or making playlists or tracking down other books in the same genre to give myself a sense of what’s already out there or starting to put together a research bibliography. Inevitably I find myself discovering tidbits of character or culture that are simply too good to lose and slowly filling in gaps in that loose outline as I go. This is one of my favorite parts of the writing process, actually, because it’s purely a time to play. But eventually something a little less amorphous emerges. Casts of characters solidify and their backstories gather detail. A skeletal plot begins to take shape.

This is when I turn to notecards. When I have a strong enough sense of “how the story goes” I open FinalDraft and start dropping notecards in a storyboard. (The freeware version of FinalDraft is CeltX, which as far as I know has most of the same features I’m talking about here. But you could also do this with old-fashioned paper index cards.) What I like about outlining this way is that it lets me play with structure while retaining flexibility–I can shuffle scenes around until I find the order that makes the most sense. These scene cards are pretty scant on detail, just a sentence or two to indicate what has to happen in the scene. For instance, here are the first few from my original outline of Villains: 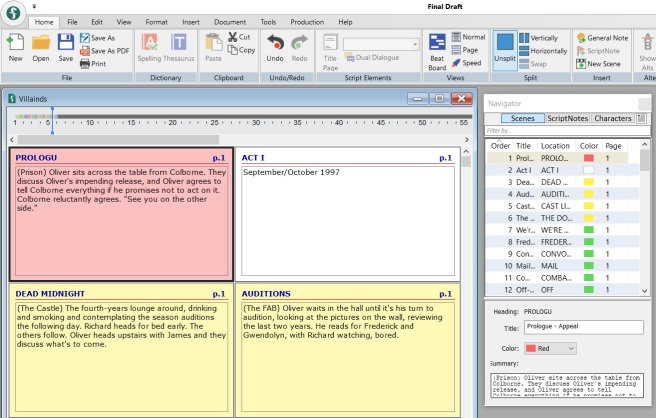 This is pretty sparse, but eventually it turned into something that looks more like this, fleshed out by character and atmosphere and everything else that makes a book a book. However, it takes a long time to get from idea to outline to first draft, and along the way there’s a lot of time spent trying to figure out how the pieces of the story fit together, how to get from one notecard to the next when you know there’s something missing in between. That’s probably the best analogy for it–it’s like solving a thousand-piece jigsaw puzzle which will eventually give you the road map you need to start writing the first draft. It’s vital work, but unlike the actual writing of prose or revision of prose already written, it’s not really something I can schedule or quantify or plan ahead. I just have to let it happen. Sometimes it’s frustrating as hell, especially when I’m excited to get started on something but I know I’m not ready yet and the muse is taking her damn time, unmoved by all my earnest pandering to her whims. But it’s also some of the most fun you’ll ever have as a writer, precisely because it is (ironically) unstructured. It’s a time to explore and discover, and there are few more exciting moments than the “EUREKA” moment of solving a plot problem or uncovering the secret of what makes a character tick. Do that for a few weeks or a few months and eventually–voilà–you have something that’s starting to look like a story.

I haven’t decided what I’m working on next. I have three different projects which are partly outlined and starting to solidify. And because I know I’ll be getting that other MS back from my agent soon enough, there’s no sense going too far down the rabbit hole with anything new just yet. But idle hands are dangerous, and an idle mind is worse. So while I’m in MS limbo, I’m going to get out the jigsaw puzzles, and have some fun, and see if I can’t make some pieces fit.

Writer, reader, melomaniac // author of IF WE WERE VILLAINS View all posts by M. L. Rio